Sakura Square has been a central gathering place for the Japanese American community to celebrate our heritage, culture and arts for multiple generations in the Rocky Mountain Region. The Tri-State/Denver Buddhist Temple (TS/DBT) has long been an important component of the block, located here since 1947. Throughout the years,  there has always been a strong working relationship between Sakura Square and TS/DBT, but they are separate entities and do not share in the ownership or management of the block. TS/DBT which celebrated its 100th anniversary in 2016, continues to collaborate closely with Sakura Square to be the focal point of many Japanese and Japanese American cultural activities including the annual Cherry Blossom Festival.

Sakura Square LLC which was established in 2014, is a for-profit entity that owns and manages the operations of Sakura Square which includes the 199 unit Tamai Tower Apartments, office/retail space, parking facilities and common area. The Sakura Square mangement team and staff are employees of the LLC. Sakura Square LLC is owned by Sakura Foundation, which is a non-profit organization whose mission is to:

Sakura Foundation was established in 2014 as a result of a re-organization within Sakura Square and was previously operated as Tri-State Buddhist Church Apartments, Inc. (TSBCAI). True to its charitable mission, Sakura Foundation is committed to preserving Japanese and Japanese American culture and heritage through programs, events, grants and scholarships. Sakura Square is a hub where many Japanese American community organizations continue to meet regularly.

It is important to appreciate the significance of this particular block, as it represents what remains of a once active Japanese and Japanese American community with residences and many small businesses. After World War ll, many who were incarcerated in the various concentration camps migrated to Colorado because of the welcoming attitude of Governor Ralph Carr inviting them to the state. This was a courageous and bold stance taken by the governor to defend the civil rights of our Japanese community, as this “open arms” attitude was not popular with many of the citizens of Colorado and ultimately cost him his political career. It was this lower downtown Denver area, which at the time was depressed with run down buildings, shabby bars and brothels, that our Japanese community was allowed to relocate and settle. Despite the poor conditions, a thriving Japanese community was established with Japanese merchants that operated grocery stores, restaurants, hotels, small shops and businesses.

This Japanese community neighborhood was doomed to be displaced when the Denver Urban Renewal Authority (DURA) announced in the 1960s that it would initiate the Skyline Urban Renewal Project to redevelop a thirty block contiguous area in lower downtown Denver. The strategy of this project was to clear the area of the outdated and dilapidated buildings, bars and cheap establishments, in hopes of attracting new businesses and economic revitilization. The block that the Denver Buddhist Church (DBC, the name at that time) occupied, was in this path of this redevelopment and would have forced it to be displaced. It was with this threat of having to relocate that the vision for Sakura Square and Tamai Tower was inspired, to establish the Tri-State Buddhist Church Apartments, Inc., to develop the block surrounded by Larimer, 20th, Lawrence and 19th Streets. TSBCAI was chartered on April 6, 1962 by legal counsel Minoru Yasui, and incorporated on April 9, 1962. The purpose of the new entity was to provide low rent housing for our elderly Issei. The stated objective was to “acquire, provide and maintain housing facilities and services for elderly persons, especially designated to meet physical, social and psychological needs of the aged, and to contribute to their health, security, happiness and usefulness in longer living”.

After much discussion among leaders from the DBC and TSBCAI boards and other stakeholders, it was decided to undertake the project under the following requirements: (a) TSBCAI would develop the whole block except the existing church facility and (b) DBC would remain but would have to refurbish the outside of their building. To accomplish this Step (a) TSBCAI looked to the FHA 236 program which enabled the project to build a housing complex that would also include commercial spaces for the Japanese businesses that were forced to relocate. Thus, this project would become the heart for Japanese business and culture for the Rocky Mountain area. On March 10, 1971, the property was purchased from DURA for $188,800, Bertram Bruton and Associates was selected as the architects, Titan Construction was the contractor, Tawara owned Bonsai Nursery donated the trees and shrubs and the Japanese Gardeners’ Association donated the landscaping labor for the Japanese garden.

The original plan for Sakura Square included a 20-Story residential tower with 204 independent living apartments with recreational and community rooms located on the penthouse level. The bottom two levels of the complex were designated for commercial use. The ground breaking ceremony held on March 17, 1971 with Mayor William McNichols and the United States Department of Housing and Urban Development (HUD) officials in attendance. The Project was named Sakura Square-dedicated to the commemoration of the men and women of Japanese ancestry who brought Japanese art, religion and culture to the region and to those who continue to sustain this cherished heritage.

The Sakura Square Grand Opening was held on two weekends: May 12-13 and May 10-20, 1973. The ceremonies consisted of the dedication of Sakura Sqaure and Tamai Tower, the first Cherry Blossom Festival and a Wisteria Festival (Fuji Matsuri) which included Japanese cultural and art performances.

An important component of Sakura Square is the Japanese garden located in front of Tamai Tower which represents an oasis of tranquiltiy in the downtown Denver urban environment. The garden pays tribute with monuments to honor three individuals that exhibited personal and professional sacrifice for our Japanese and Japanese American community with their selfless acts of giving.

Ralph L. Carr was the Governor of the State of Colorado when World War ll broke out. His stand in defending and welcoming Japanese Americans to Colorado after the war cost him his political future, but his steadfast support for their rights attacted many to relocate to Colorado to enhance the Japanese community as we know it today.

Minoru Yasui was a community leader and civil rights activist who went to court to challenge the legality of government actions that restricted the rights of Japanese Americans. He was so committed to this cause that he spent nine months in solitary confinement to question the government’s right to discriminate against Japanese Americans based soley upon their race.

Reverend Yoshitaki Tamai devoted 53 years of his life in spreading the Buddha-Dharma throughout the region and touched countless number of lives. He is remembered for his kindness, dedication and compassion. His personal sacrifice as a young assistant minister in the 1930s allowed the Denver Temple to survive during a financially difficult period. His leadership and example were critical in the Temple gaining strong direction and vision for  their future.

As Sakura Square looks forward with anticipation for the many opportunites that the redevelopment of the block will bring, it is important for us to remember the hard work and dedication of those who came before us and built our community. It is with this great sense of gratitude for this precious gift that we have been given, that we embrace our responsiblity to remember and honor our Japanese heritage, traditions and cultural past. We must also strive to evolve by keeping our traditions fresh and relevant for future generations. Sakura Foundation is committed to continue to work in partnership with our  community to achieve these important goals. 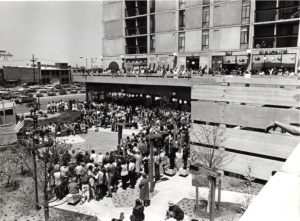 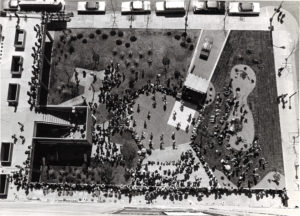