Flags Bring History to the Forefront

Flags Bring History to the Forefront 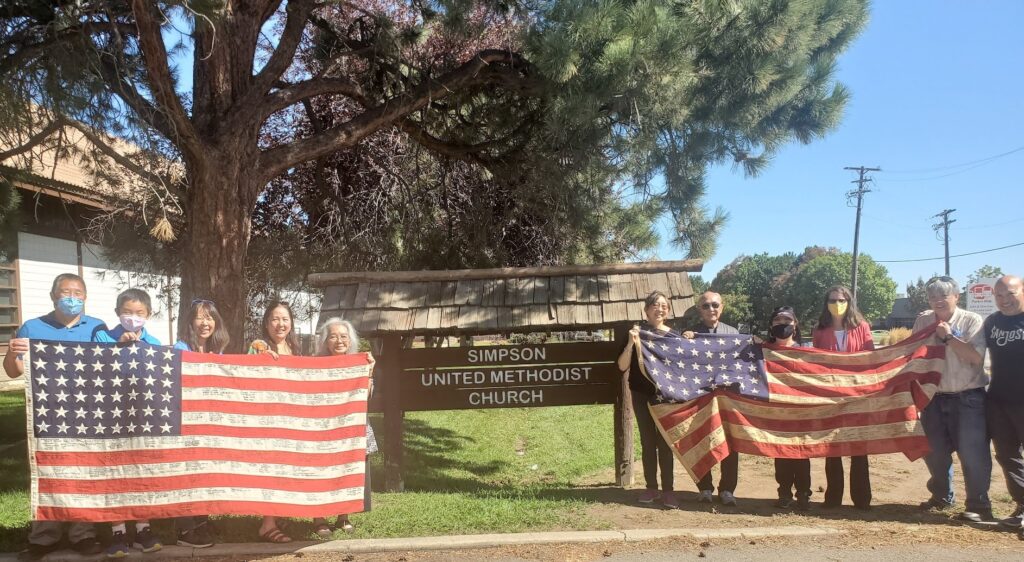 On a balmy Sunday in October, three 48-star flags were laid on tables under a large tent at Simpson United Methodist Church.  Over the course of three hours, 45 Colorado residents who were unjustly interned in concentration camps during WWII signed the flags, the ink soaking into the fabric just as their years of internment have permeated their memories.  Many of the signers caught up with old friends they had not seen in years, shared memories of their time in “camp,” and pondered the role that their signatures will play in telling the story of the internment to future generations.

Mary Jane Okamatsu, 76, was interned at Heart Mountain Wyoming.  She current resides in Littleton, CO and shared her reflections on the event:  “It was an honor, and with gratitude, to be a part of the flag signing event.  It symbolized and reinforced the loyalty of the Japanese people, to the United States of America, even while interned.  I was born at Heart Mountain and had the opportunity to visit the area 20 years ago.  What an impact it made on me seeing things that were still there:  the vegetable vents, where the high school was located, the area where hogs were killed for food, the big red chimney that heated the hospital, and even some barbed wire.  Words could not express what I saw and felt that day walking between two buildings that were still there.  It was a day of mixed emotions.  The monument with names of those who served our country took my breath away.  They served while their parents were behind barbed wire.  They must never be forgotten.  We must continue to honor the memories of our parents and grandparents who endured the atrocities with dignity and gaman.  We must continue to be proud of the resilience of the Japanese people.  Let us never forget this time in history so it will never be repeated!

Gaman is the Japanese concept, rooted in Zen Buddhism, meaning to endure the seemingly intolerable with dignity and patience.  Many internees attest that gaman is what helped their families survive the atrocity of losing their homes, possessions, and livelihoods and being placed in concentration camps for no reason other than their Japanese ancestry.  A total of 120,000 people, two-thirds of whom were American citizens, were rounded up and sent to a total of 10 concentration camps as far east as Arkansas.

This flag signing project was envisioned by the Honorable Johnny Cepeda Gogo, judge for the Santa Clara County Superior Court in California.  He relays the creation of this project as follows:  “The three main inspirations for this project were my colleague Santa Clara County Superior Court Judge Roberta Hayashi (whose parents were interned), Dr. Karen Korematsu (daughter of civil rights activist Fred Korematsu) and civil rights attorney Dale Minami.  Judge Hayashi started to do community outreach about Fred Korematsu Day and I began to help her with that outreach, which led to me meeting Dr. Karen Korematsu and Dale Minami (one of the lawyers who helped get Fred’s conviction for evading internment set aside).  I wanted to help recognize and honor more of our Japanese American community members who were still alive and had spent time in the internment/prison camps and that’s how I came up with the creative idea of having survivors sign a 48-star American Flag.”  The flags will be donated to the Japanese American Museum of San Jose and other museums on Fred Korematsu Day, January 30, 2022.

Judge Gogo adds:  “The experience in Colorado was fantastic due to the efforts of George and Ruth Kawamura, Sakura Foundation, and Simpson United Methodist Church to organize and publicize the event.  We had a wonderful turnout because of the great local support.  And I will be returning to Colorado the first week of November to visit Camp Amache area to honor the memory of the Japanese Americans that were incarcerated at that site.

The impact of the stories that have been shared have been emotional and profound.  On the one hand, it can be difficult to have folks bring back these memories from long ago because of the heartache and pain, and on the other hand it can be cathartic for folks to release the stress of these memories.  In the end, the nearly one thousand folks from around the country who have signed the flags have been very appreciative and grateful for the opportunity to be part of this historic project.”

Reflections from a few of  the flag signers:

“I only have pictures of my experience in camp because I was just a toddler. But, talking live with other internees was more emotional than I could’ve imagined. I’ve done lots of research about this unconstitutional event since I have no real concrete memories of my own. Talking with other internees made all that research come to life in a whole different way. Thank you Judge Gogo for an amazing innovative project to immortalize this experience that will hopefully, never occur again.”

“Sure glad Johnny Gogo is heading this historic project. His dynamic personality and leadership should assure success. The signatures of the remaining camp internees on the flag will document that we were prisoners of these concentration camps. It is very timely because the number of internees is dwindling fast.”

“The Oct 3rd Flag Signing Event in Denver was done in an excellent and efficient manner. The signers were slotted into 15-minute intervals and they came in in their allotted times to sign the flag. This reflects on Stacey Shigaya and the work of the wonderful volunteers. I was too young to reflect much on my time in the camps but it must have felt hopeless for my parents as they looked to the future, especially for their children.”